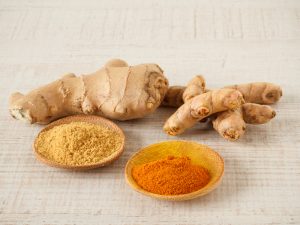 Ginger is one of the most commonly prescribed herbal remedies for pain associated with menstrual cycles in the complementary medical field, and science backs up this recommendation.

For some, menstrual pain can be debilitating, causing extended absence from school and work (think of the global productivity impact!). Conventional treatment options for painful periods, which are referred to clinically as “dysmenorrhea,” are lacking, and women often resort to hormonal birth control or non-steroidal anti-inflammatory drugs (NSAIDs). However, like so many other medical issues, if we dive into the root cause of period pain, ideas for alternative therapies arise, and perhaps a role for ginger and turmeric.

During a monthly bleed, substances called prostaglandins are released to trigger contractions in the uterus, which help to expel its lining. Another important function of prostaglandins is to mediate the inflammatory response. This means that at baseline, menstrual bleeds involve some level of inflammation, and women with higher levels of prostaglandins experience more severe cramp pain. Another factor linking inflammation with menstrual pain is C-reactive protein (CRP). CRP is a biomarker that is commonly used in medical research to identify inflammation. One study found that women with higher levels of high-sensitivity CRP experienced greater premenstrual syndrome (PMS) symptoms, including abdominal cramps and back pain.

I’ve written about the anti-inflammatory effects of ginger and turmeric in the context of several diseases and medical conditions, and it seems that these effects extend to the inflammation and associated pain of menstruation. In 2016 a systematic review and meta analysis was published that examined the effectiveness of ginger to manage period pain. This type of study pools data from every previously published trial that meets certain inclusion criteria. (It is a great way to investigate efficacy, especially when a number of small trials have been conducted on a given topic.) When the data from this review was analyzed, ginger was found to be more effective than placebo in moderating menstrual pain, and there was no significant difference in effectiveness of pain reduction between ginger and a common NSAID.

Curcumin, a bioactive compound in turmeric, is also compared to NSAIDs for pain relief. In this randomized, placebo-controlled trial, women who suffered from PMS were either provided with Curcumin or placebo. Over the course of three menstrual cycles, women in both groups recorded the severity of their symptoms. At the conclusion of the trial, the data revealed a significant decrease in PMS symptoms for the women in the Curcumin group. Further, there was a significant difference in symptom decrease for the women in the Curcumin group when compared to placebo.

While these studies provide optimism for the role of natural remedies in menstrual pain management, more work is needed to establish vetted recommendations. Menstrual pain should be discussed with a physician, as some may be linked to more serious concerns, and one should always discuss dietary changes with their healthcare team. Both ginger and turmeric can be safely consumed throughout the month and bring incredible flavor to food and beverages. If you’re a menstruating woman, add some extra spice before and during your period, and you’ll reap the anti-inflammatory benefits of these herbs. Hopefully, you’ll notice a decrease in PMS symptoms as well.